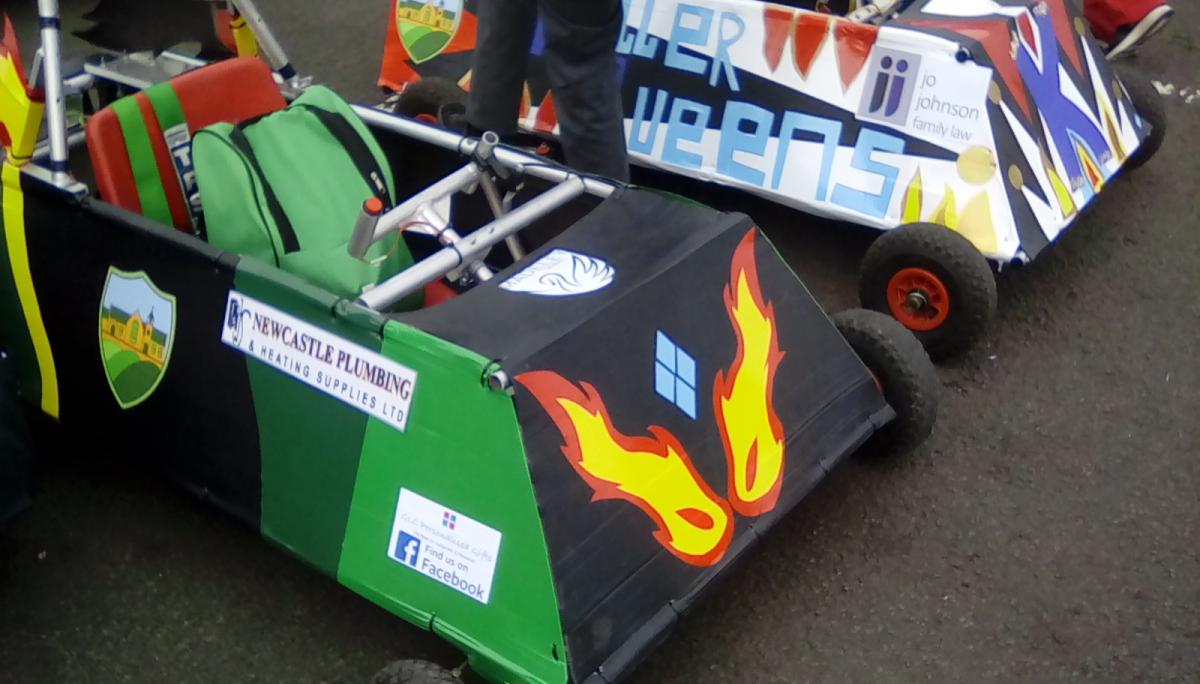 Over the past two terms, a group of Y5/6 pupils have been working closely with staff and Y9 pupils from Madeley School to design and build a green powered Goblin car. Yesterday members of Class 4 thoroughly enjoyed participating in a Green Power Goblin Car race in Stafford. As ever, their behaviour was exemplary throughout the day and they showed great competitive spirit as well as brillaint sportsmanship.

A huge thank you to the staff at Madeley High School, in particularly Mr McCue, and the pupils in Y9 for making this event possible. The children have thoroughly enjoyed working with you each week on this project and appreciated your support and encouragement on the day.

Here you can findthe pupils' thoughts about the day: 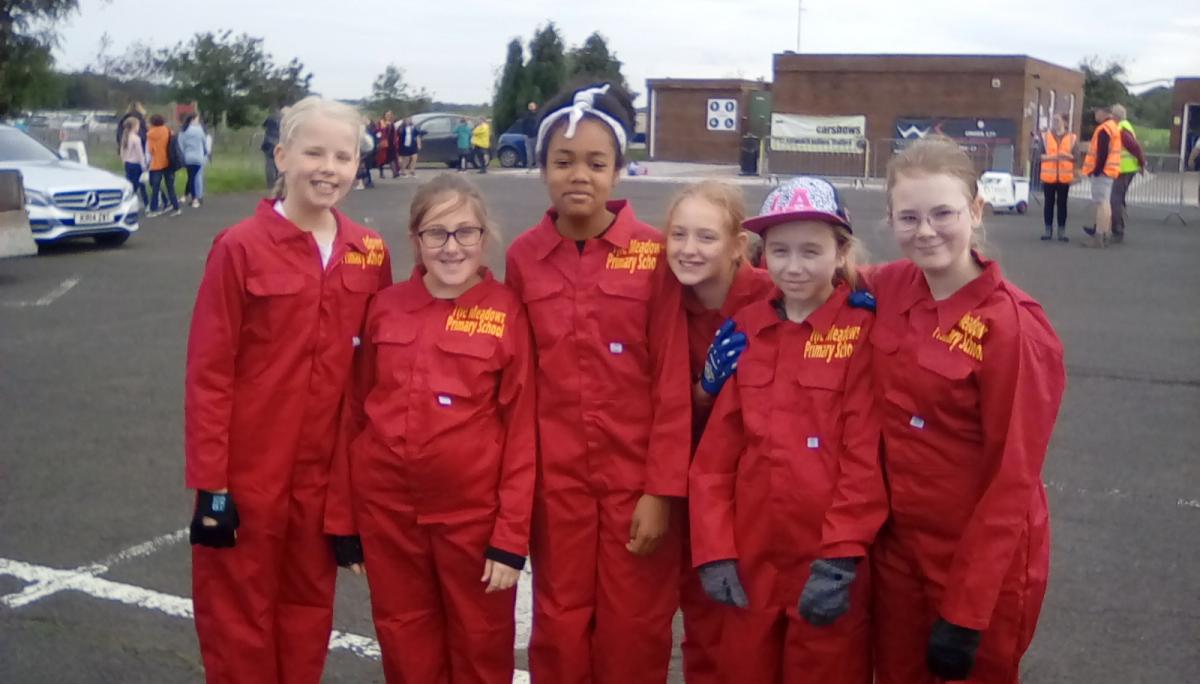 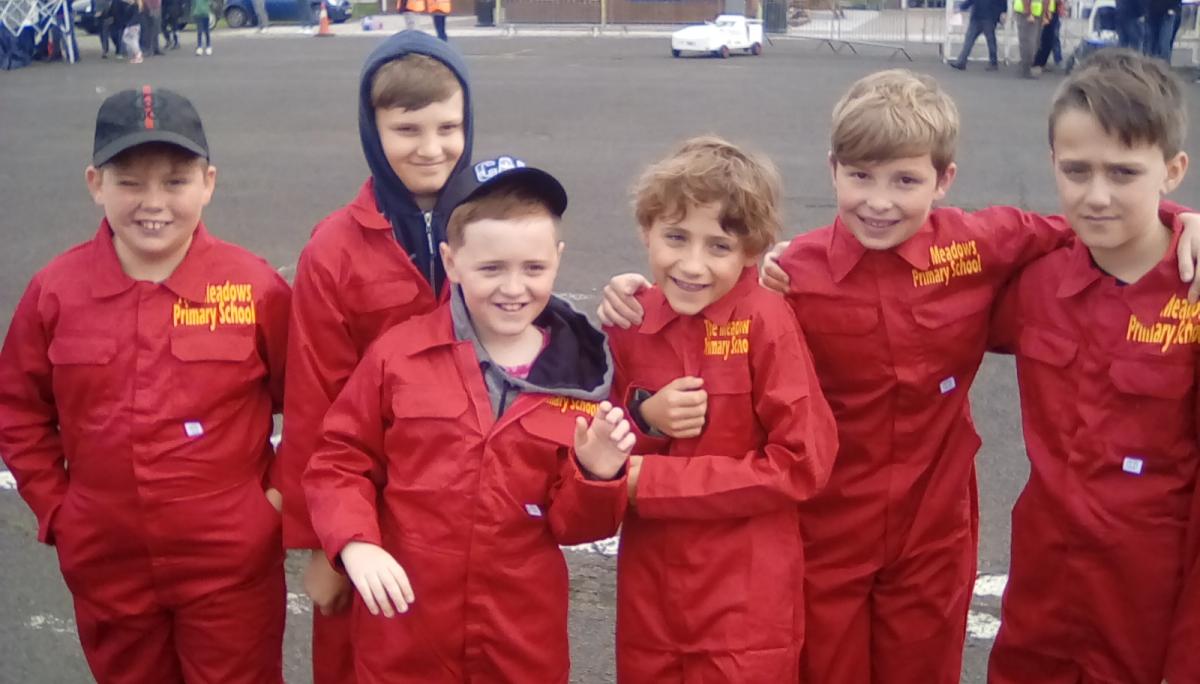 On Wednesday 19th June, 46 cars raced to try and win the 2019 Goblin car race.  Both teams from The Meadows  (Maserati Meadows and the Killer Queens) were overflowing with excitement. The girls’ team came up with a very strange handshake…  Before the race could begin, each car was risk assessed to check that they were safe to be raced. The girls’ car passed with flying colours. Unfortunately there was an issue the boys’ battery, however this was quickly fixed by Mr McCue (a D&T teacher from Madeley School) and then the boys’ car was ready to go. 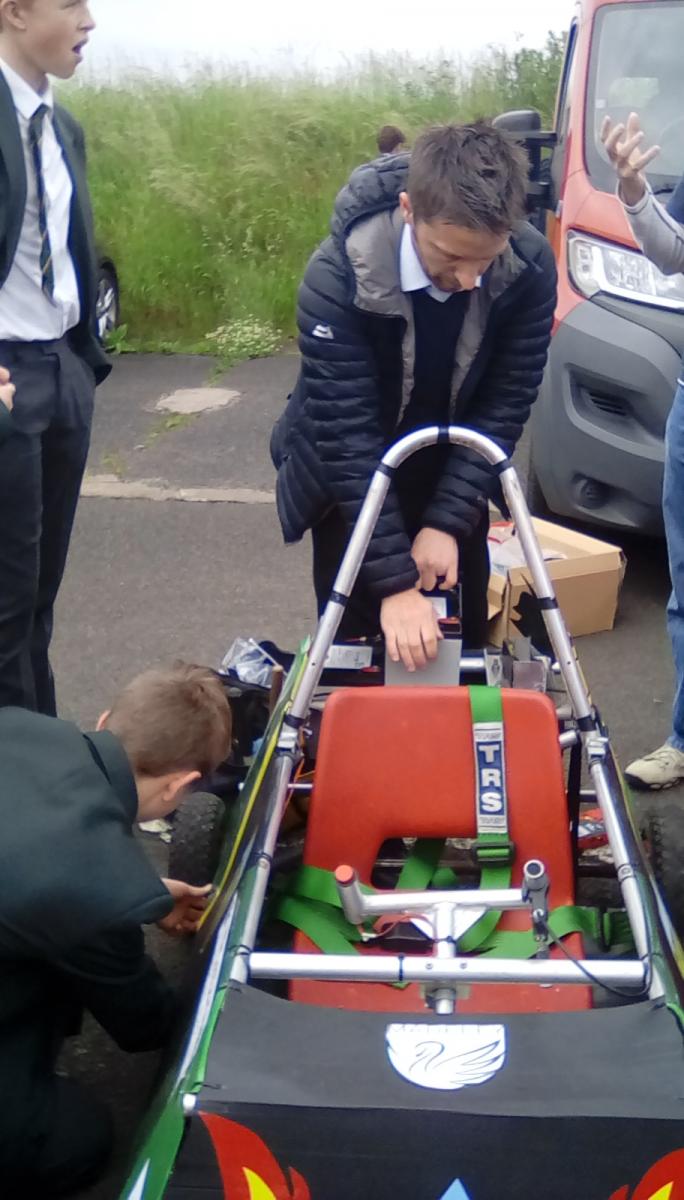 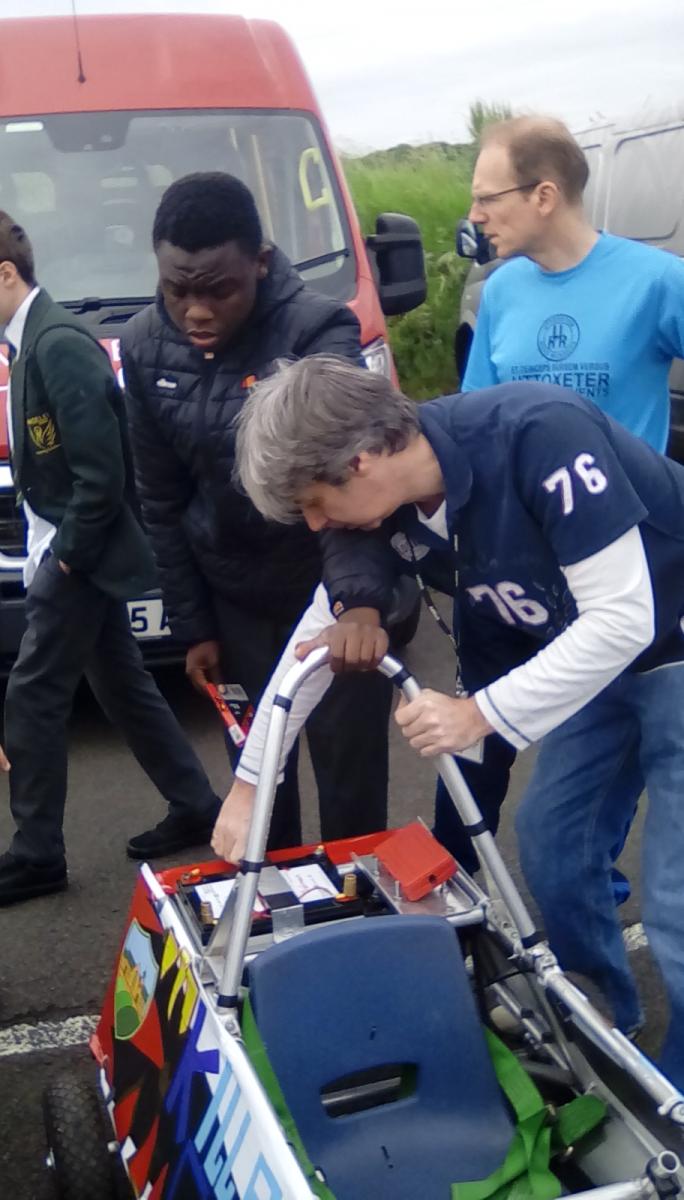 The first race was the drag race, which was a race where you go in a straight line and try to come first against another car. This event helped to build teamwork and to see how fast our cars really were. It also helped to build up our competitive edge. Next, we went to the slalom (which was timed) where we had to drive the car around cones without hitting any. If you hit a cone you got a 2 second time penalty. At the end, we had to stop in a box and not hit the cones around it. This proved to be very challenging!

Following this event, we competed in the timed lap challenge, which was where we had to go around a track to try and get the fastest time. Points were earned depending on how fast you were.

In the final race, the boys and girls chose one driver to compete in the lap race, around a much larger track, against two other cars. This was very difficult because you had to think about your tactics of beating other competitors. Our drivers really pushed themselves out of their comfort zone and tried something new. Unfortunately, the girls didn’t get through to the semi-final but they did have a brilliant effort. The boys got through, thanks to brilliant driving from Archie  to win the first round.  Whilst we didn’t win the semi-finals, we were all so proud of our achievements and really cheered each other on.

The day was very challenging because there were different types of cars. The most challenging competitor that we faced was the Flamingo car, as the school had been working closely with Bentley. Although we didn’t win any awards, the day was a brilliant experience and we were very lucky to get to go. We showed great determination and it was a great team building exercise. Thank you to all the teachers who took us to the race and we would like to say a huge thank you to Madeley School for supporting us in our ambitious venture.

By Sky, Archie , and Codie 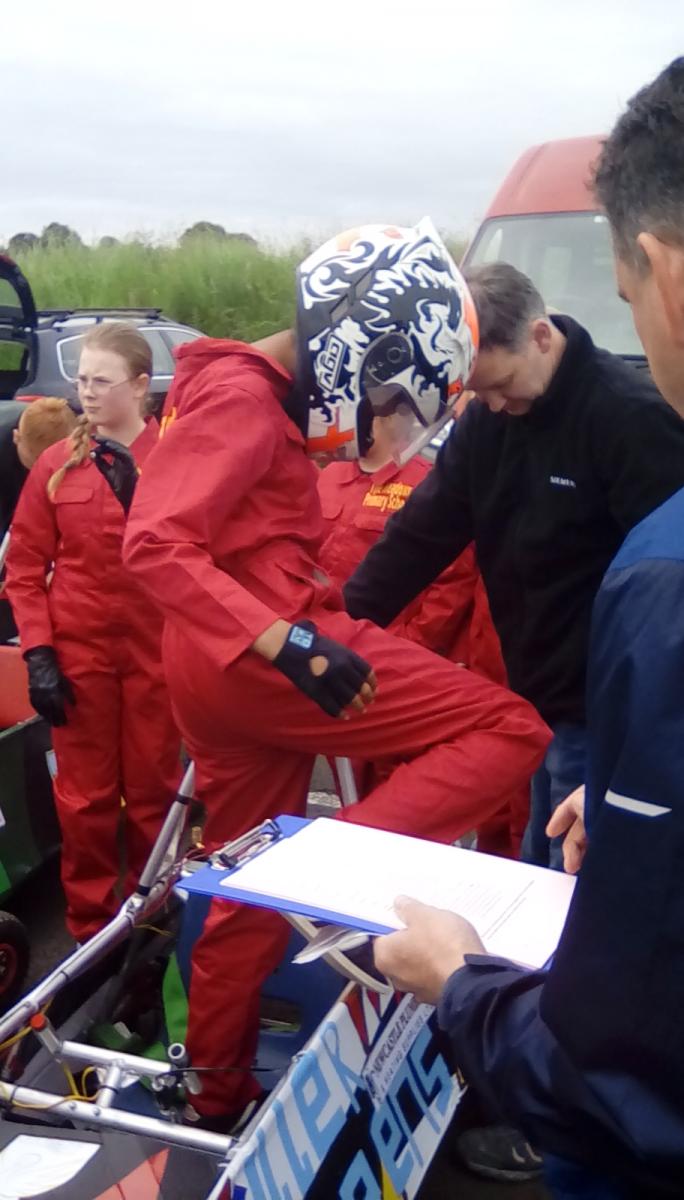 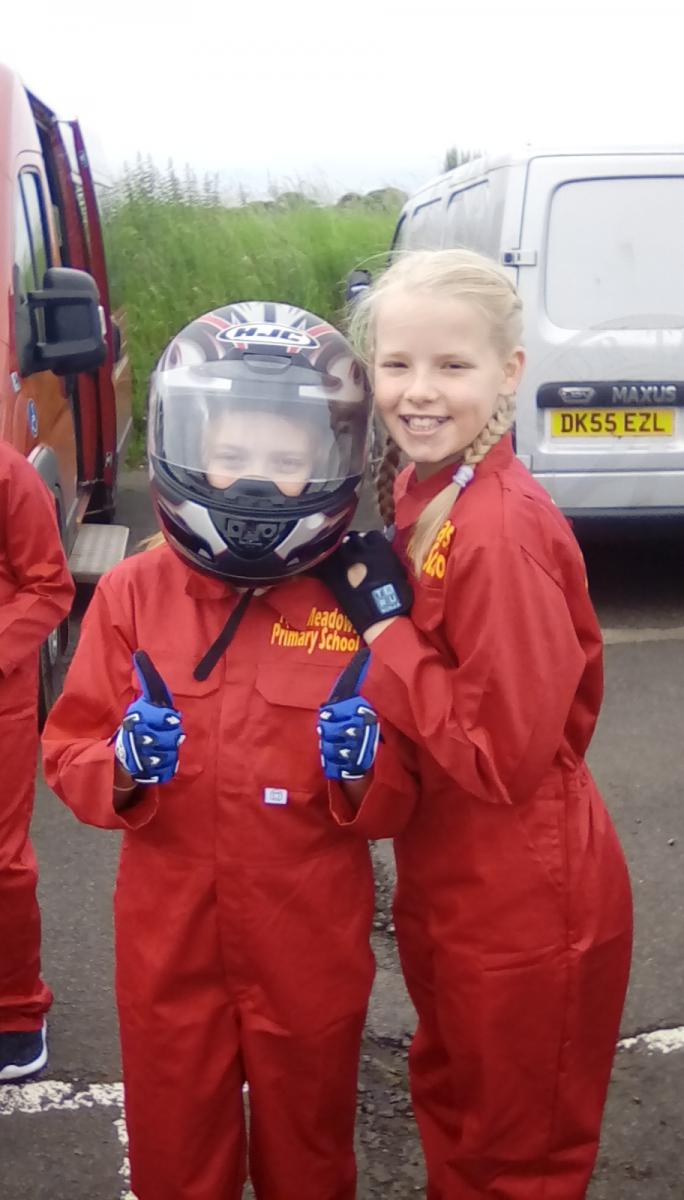 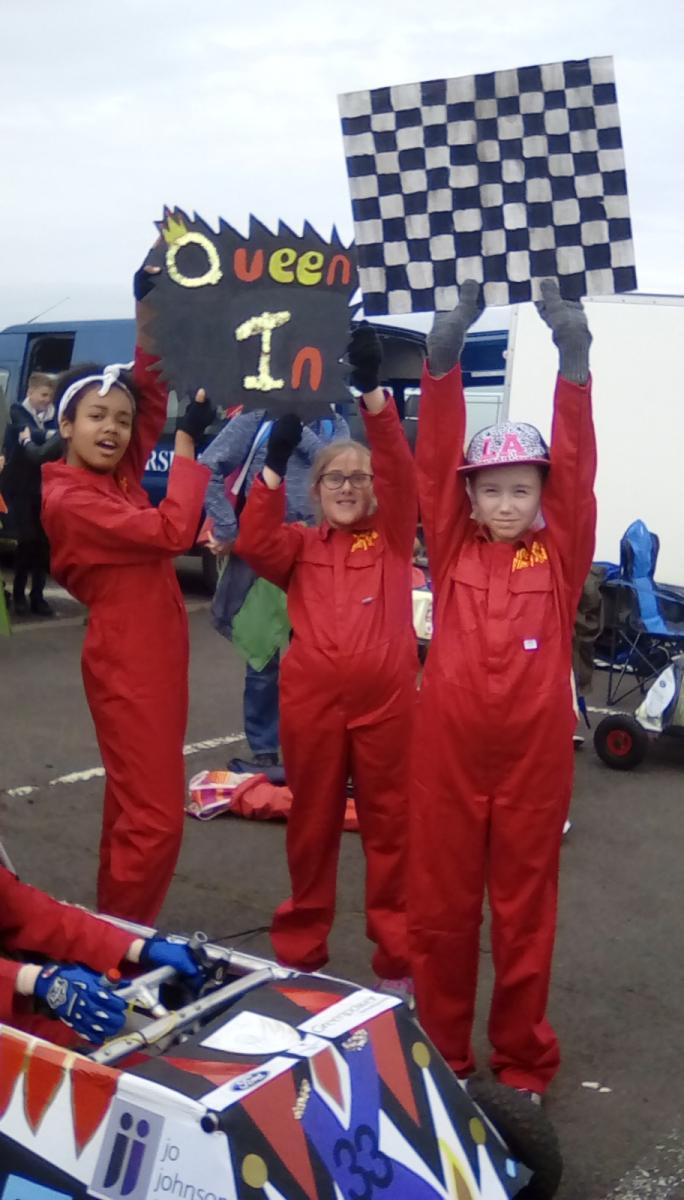 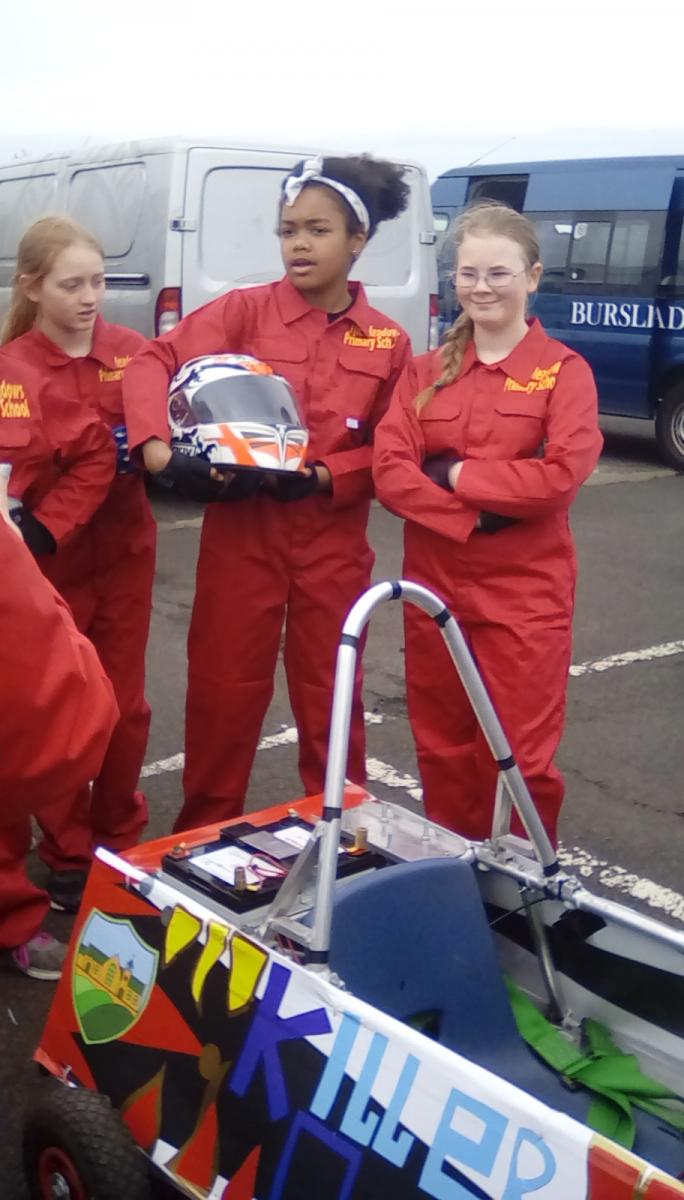 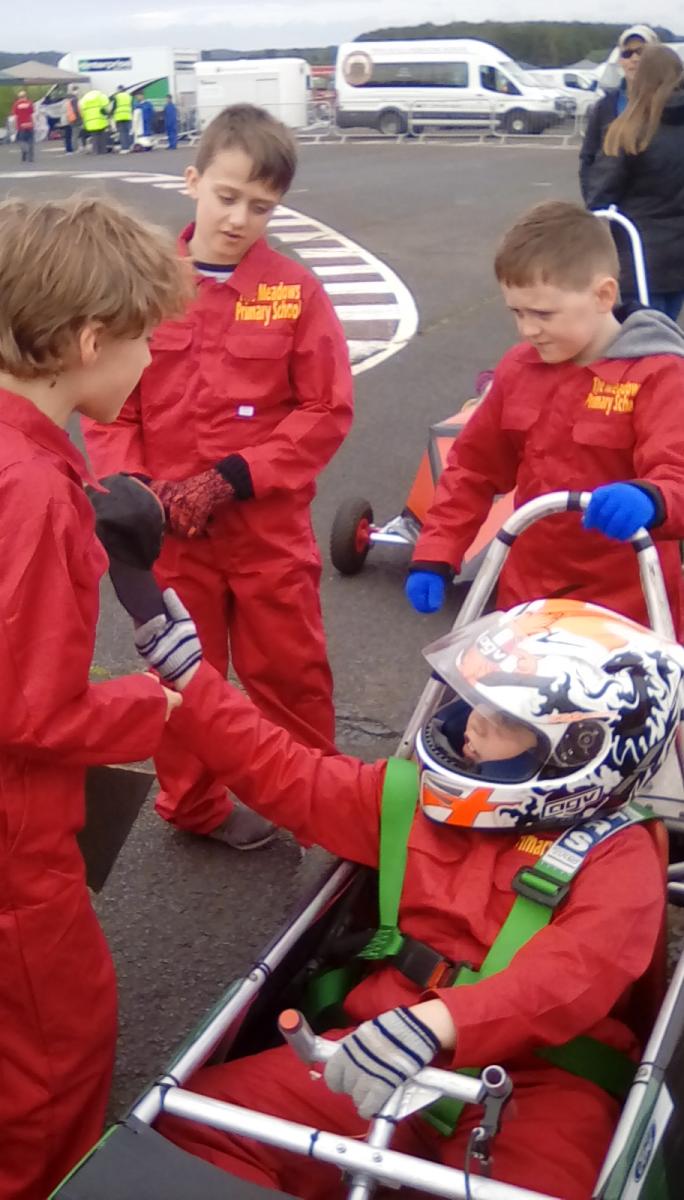 On the 19th of June 2019, some children from The Meadows Primary School – year 5 and 6 - took part in an event in Stafford called: The Goblin Cart Drag Race. The first event was the drag event where each car had to race down a length of track against another car. Each member of the team had to compete - there were six races in total.

Each driver had the chance to drive and push their team’s car. Before we drove the cars, we helped our team mates to put on their seat belts and helmets. This safety check was essential.

The aim of the race was to gain points by making it to the finish-line first; the teams with the most amount of points by the end of the whole event won the 1st, 2nd and 3rd  place. 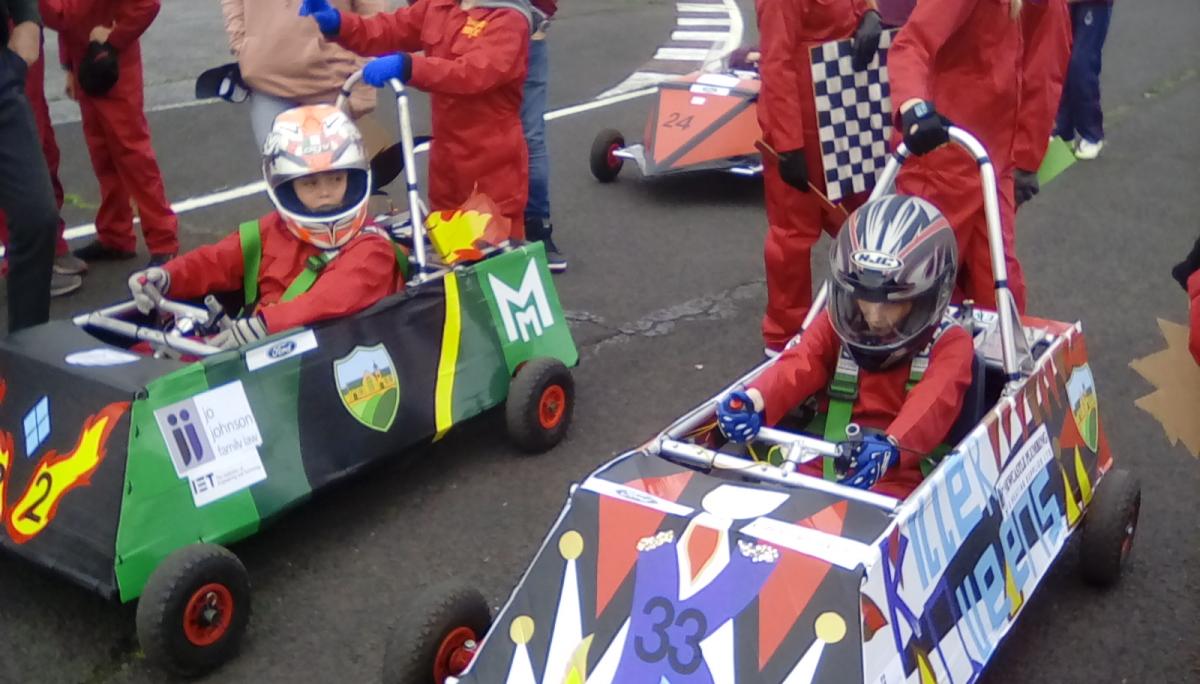 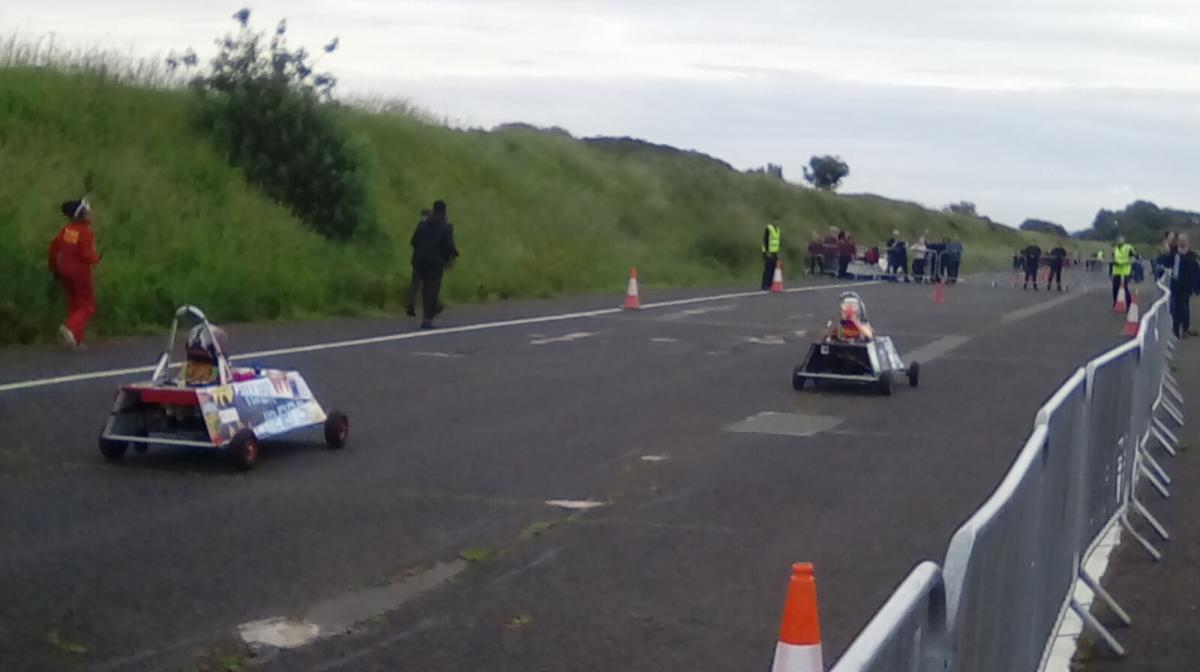 The first race was between both of The Meadows teams. For this race, the boys team (The Maserati Meadows ) won. This was partially due to a problem with the girls’ motor, which had to be fixed quickly by a Y9 member of the team from Madeley School after the race before the next driver took their turn.

Even though our teams did not win the event, everyone enjoyed the race very much; we all found the whole event extremely fun (and tiring). We all had determination to try our best throughout the event, as tired as we were.

By Megan and Indigo 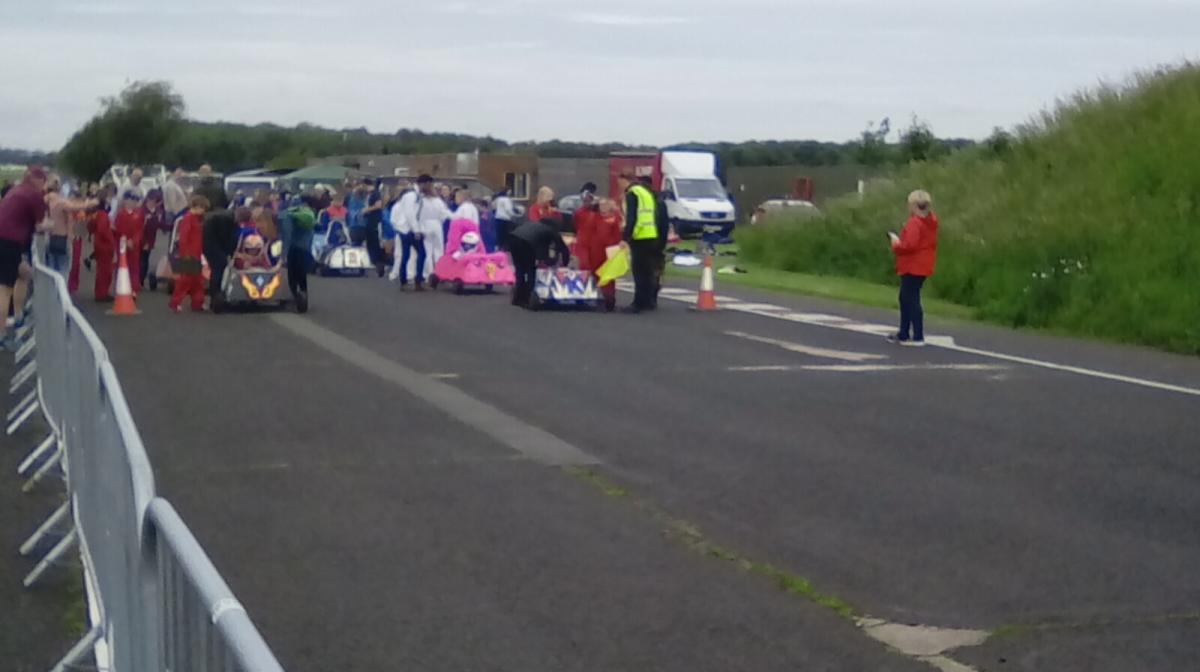 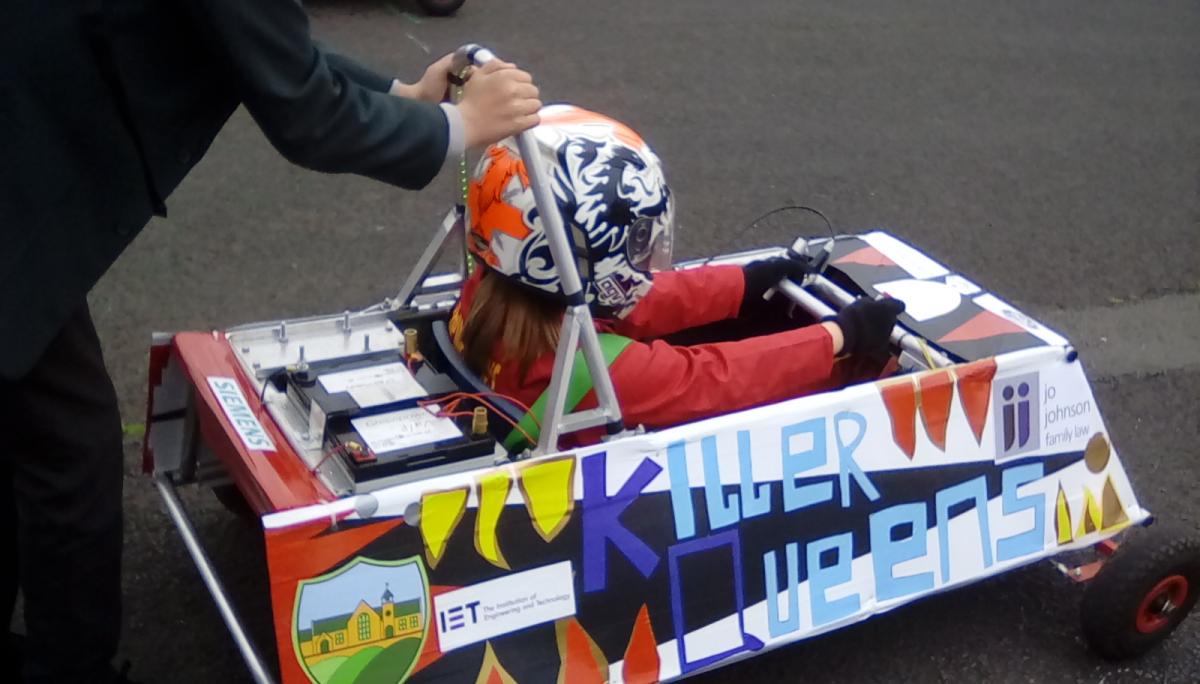 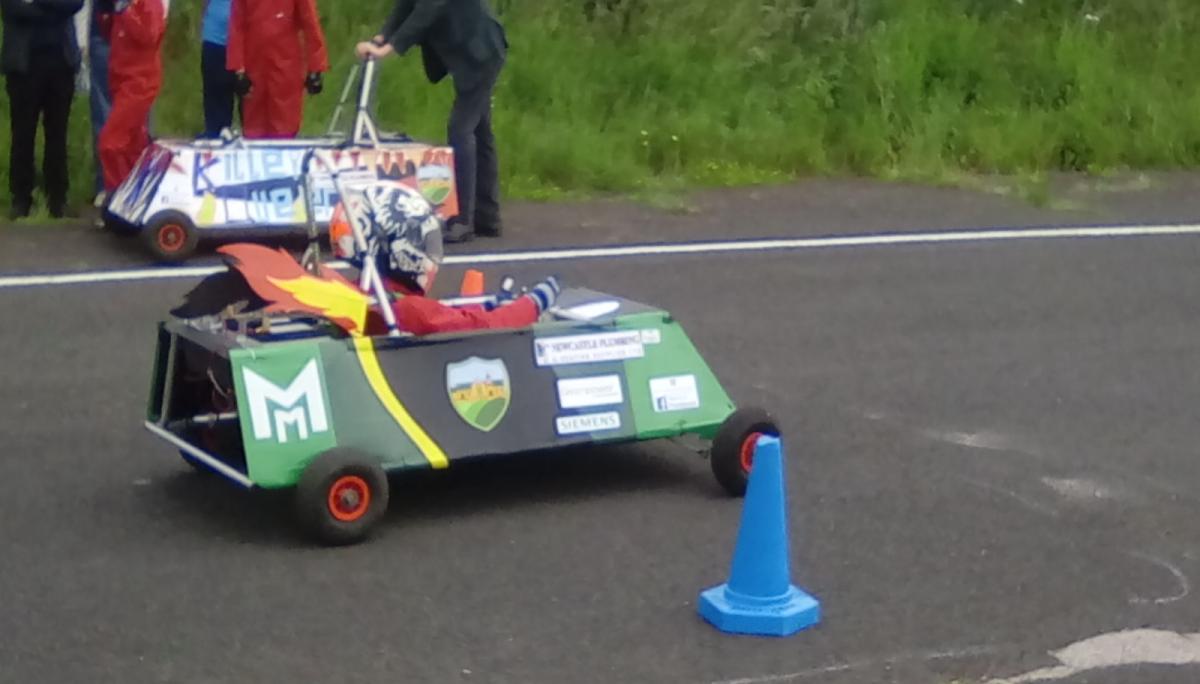 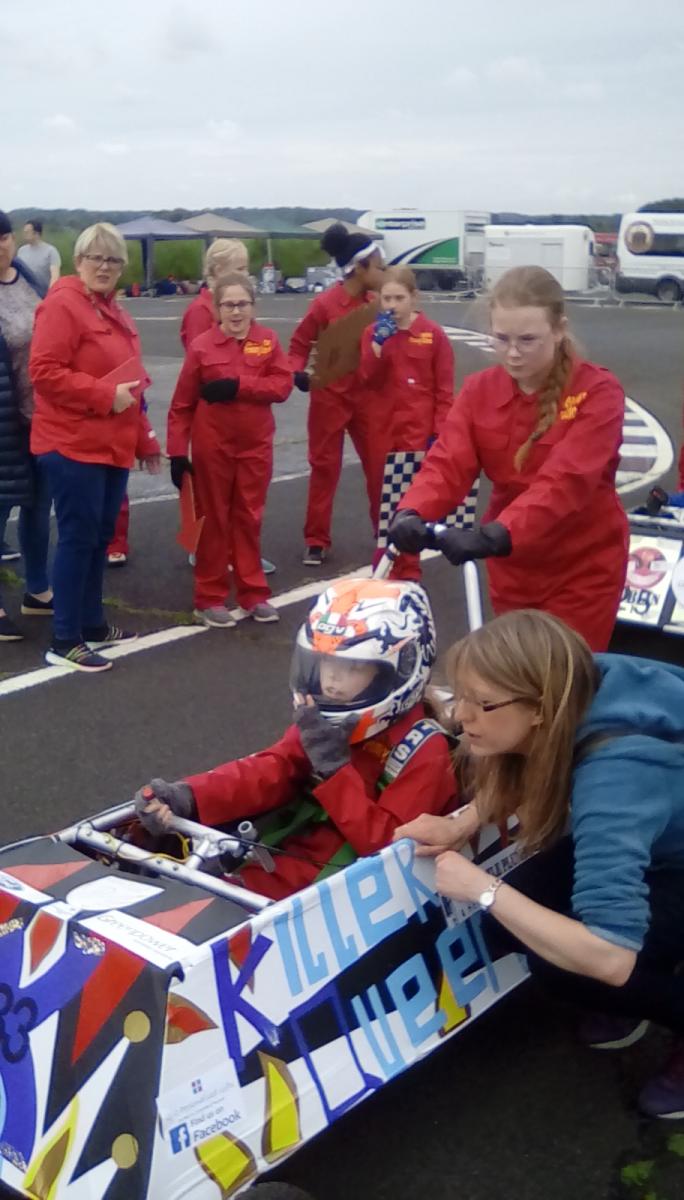 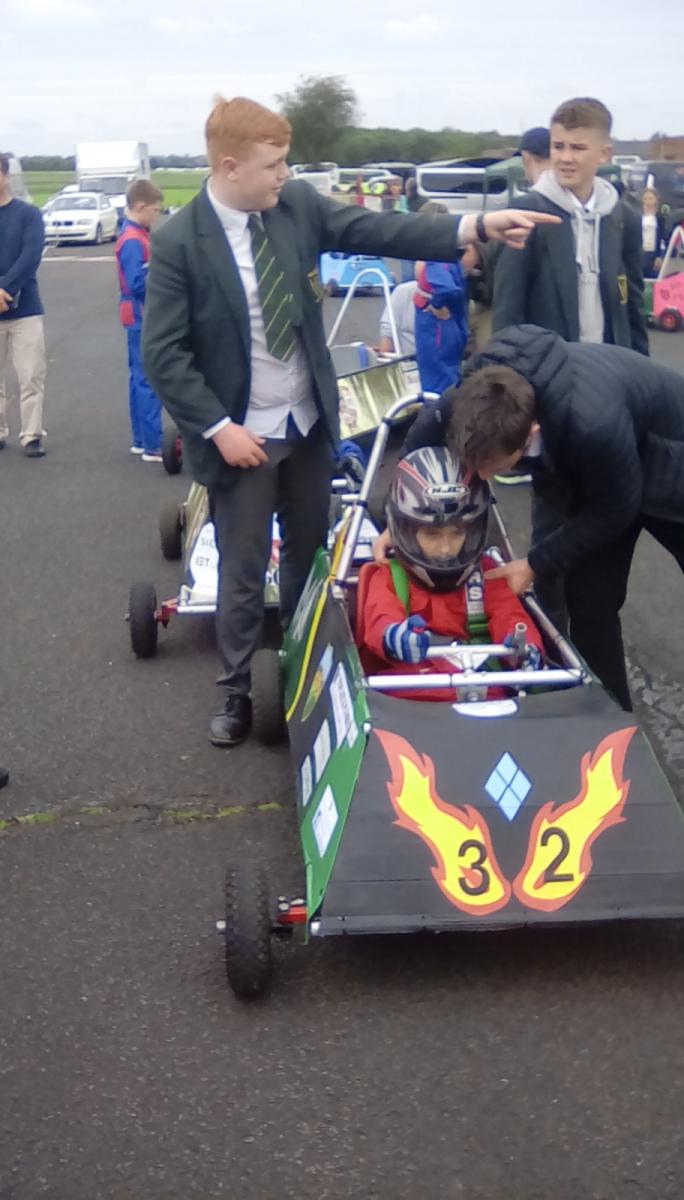 On the 19th of June, pupils from Class 4 had the chance to race our own Goblin Car across four different types of tracks including the slalom, which reminded us of an obstacle track. We had to drive carefully through five gates that were made out of cones and stop without knocking over any of them. In all of the races, we had to ensure that we were quick (because we were being timed) but in this particular race we had to use accuracy as well.  If we touched any cones, we would incur a time penalty. 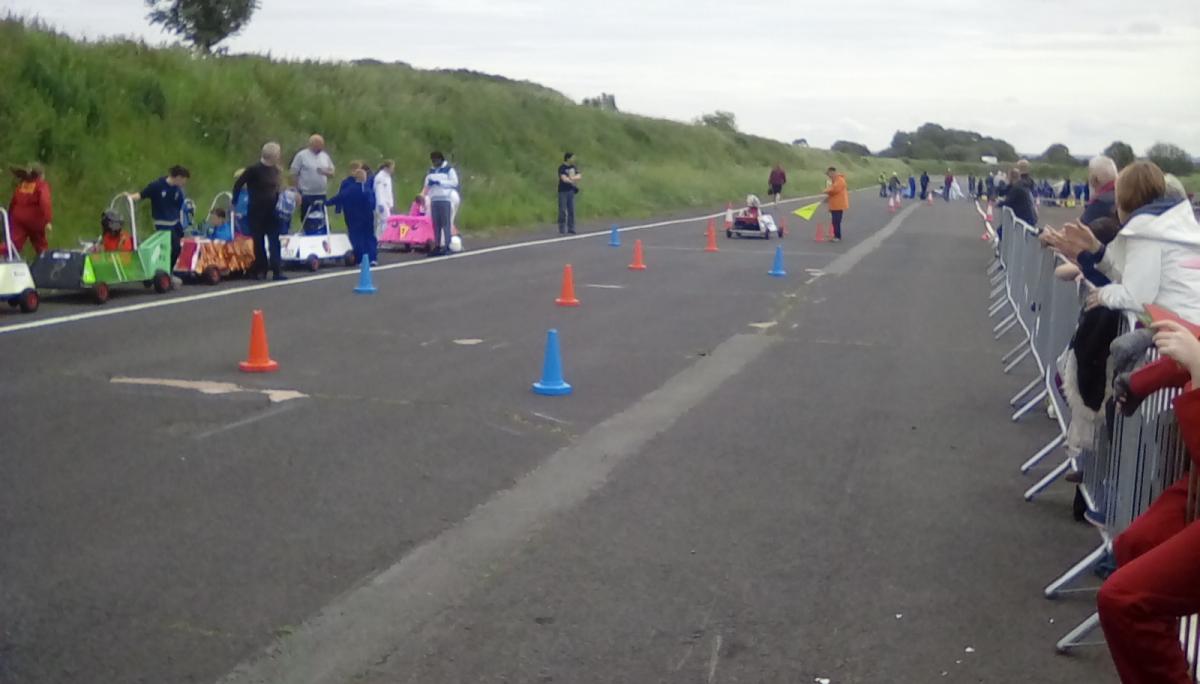 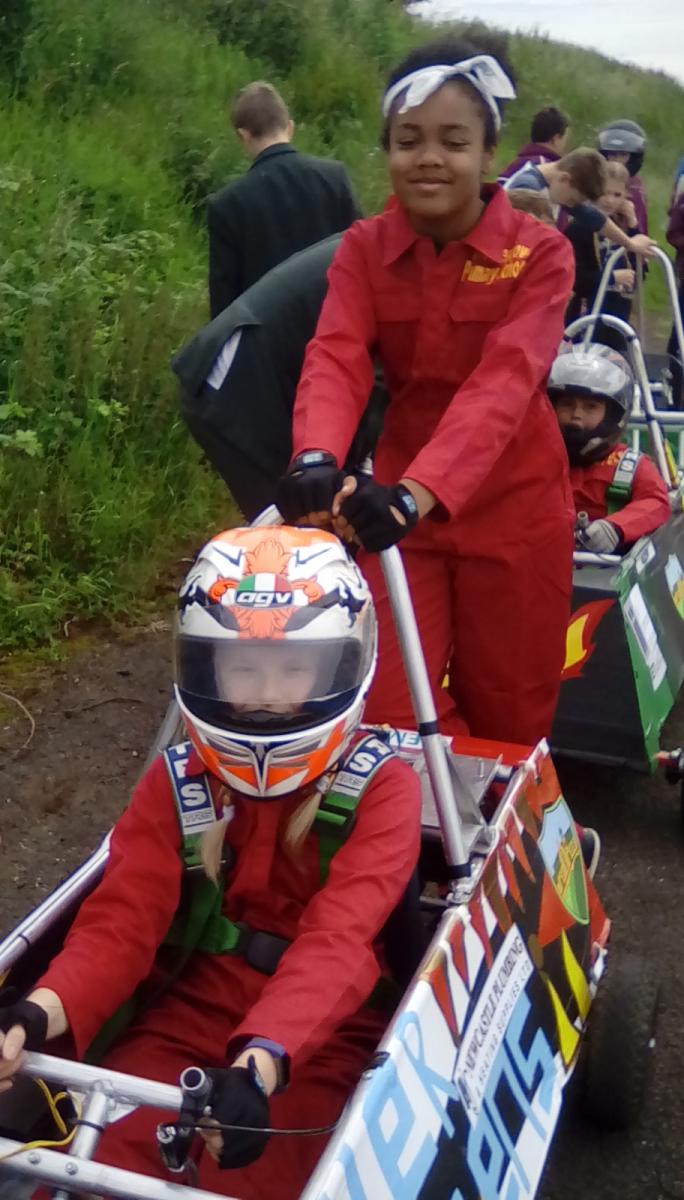 Overall, we enjoyed driving through the gates because we had never done this type of racing and we got to experience how racers do their gate races. The only problem with this race was that the steering was quite hard because there were lots of sharp turns to get through the gates. 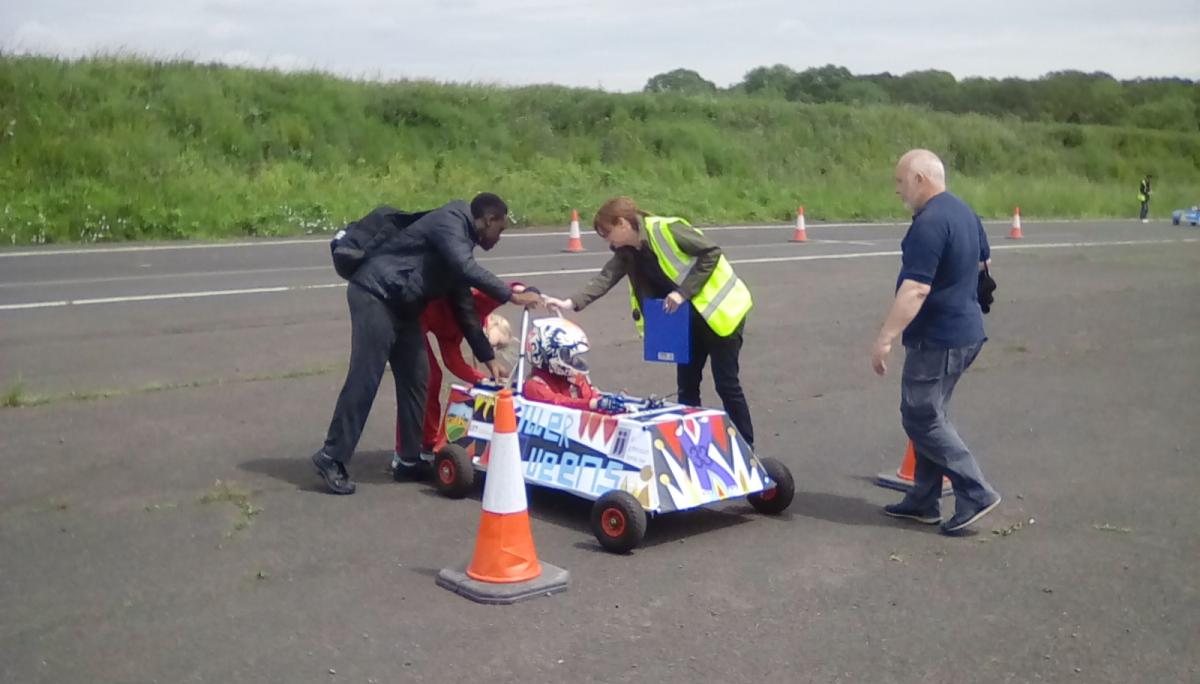 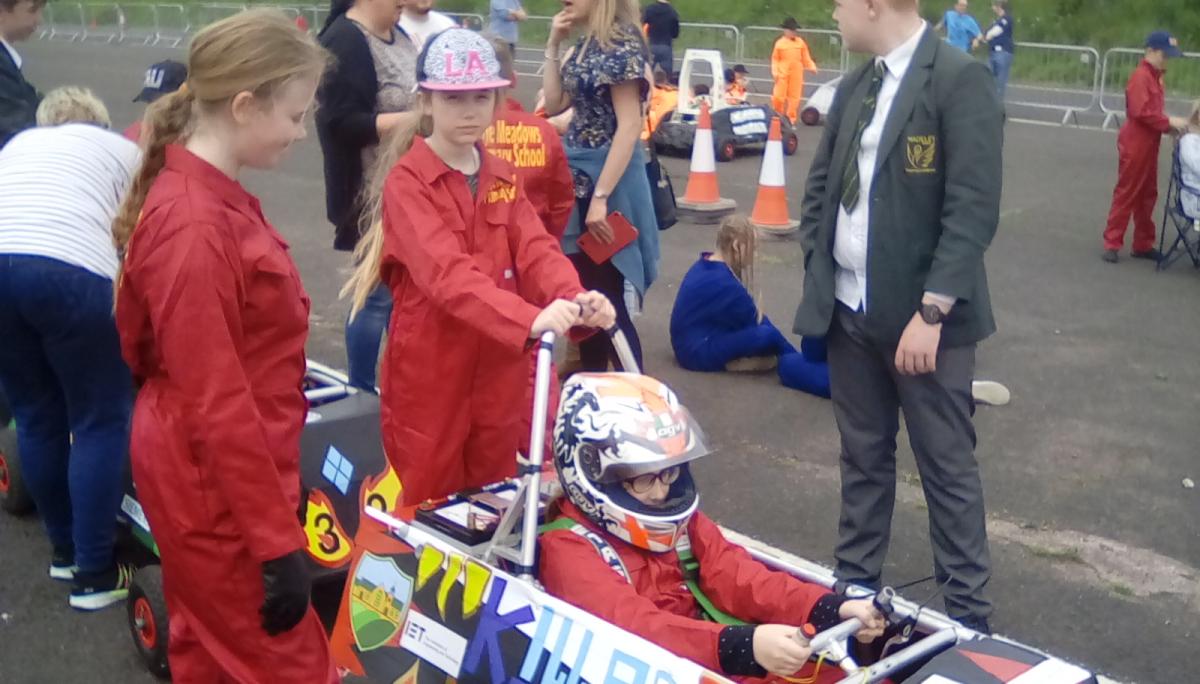 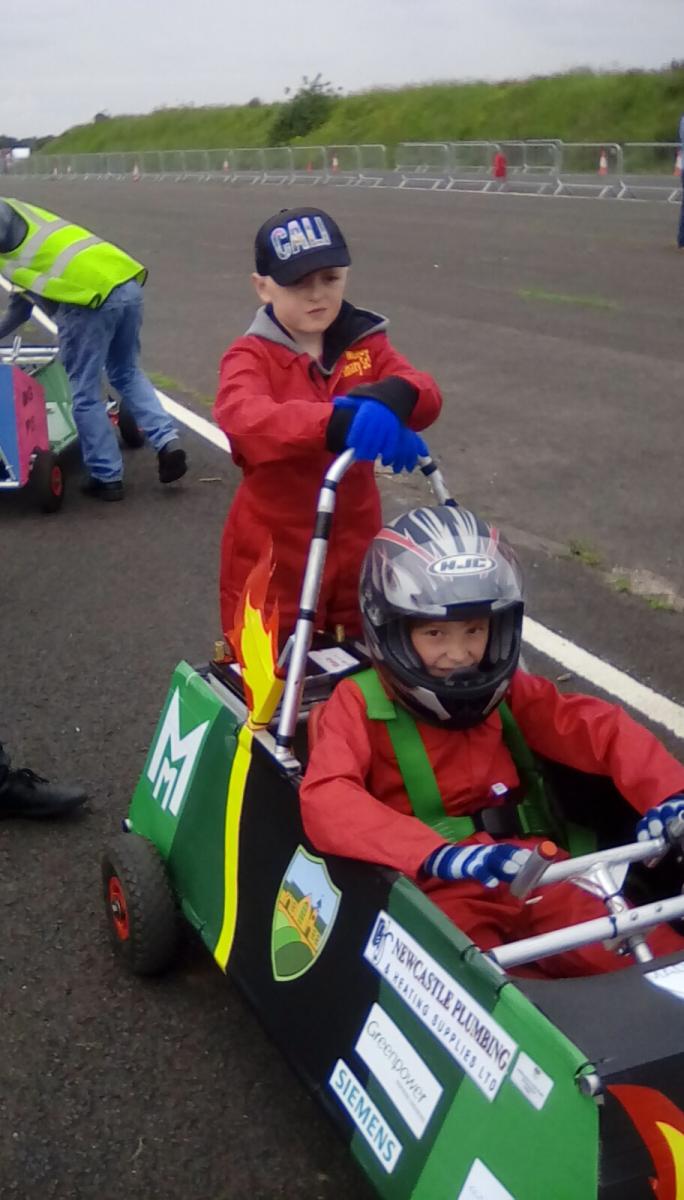 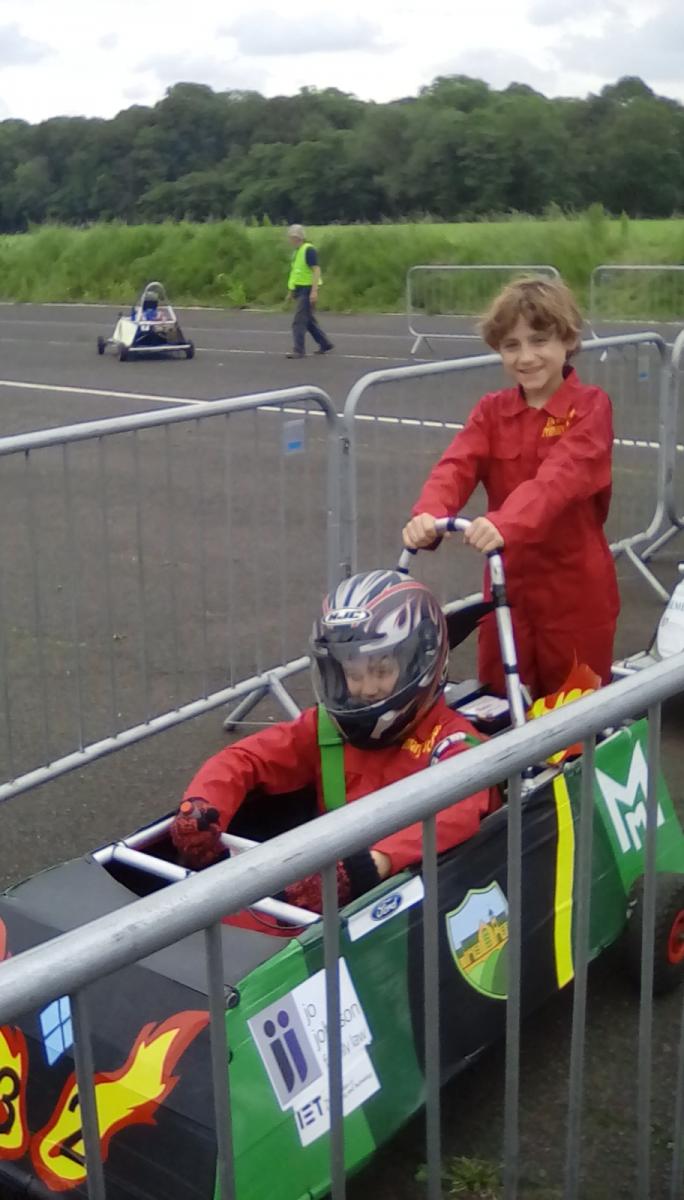 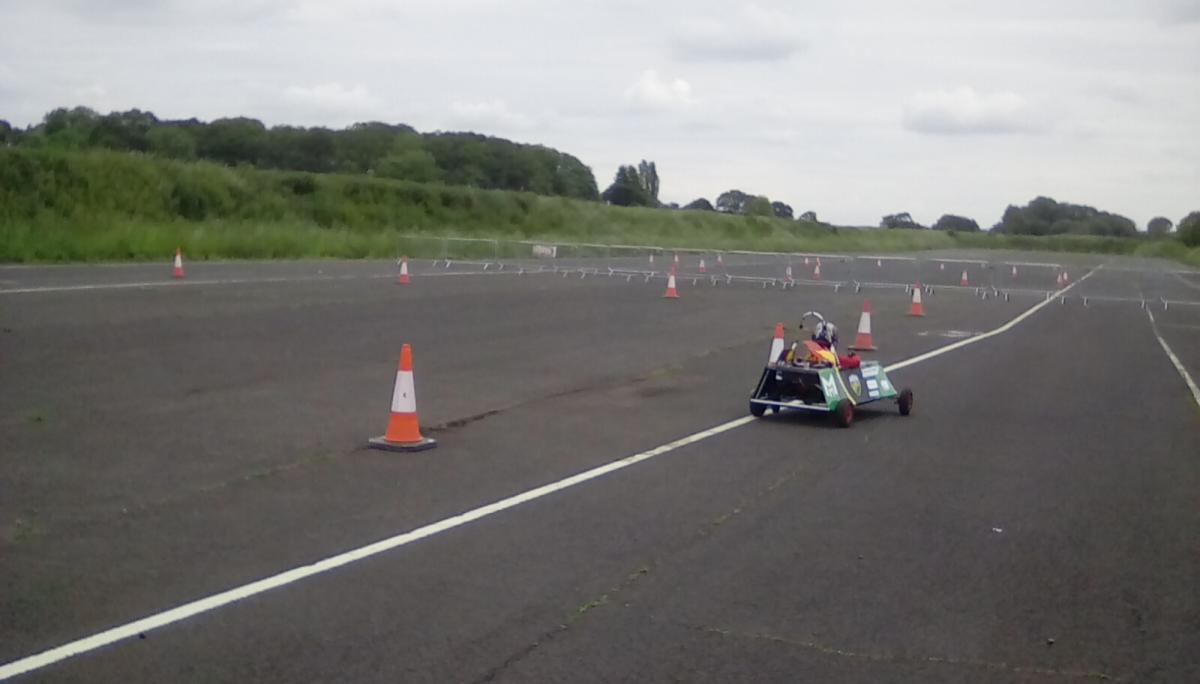 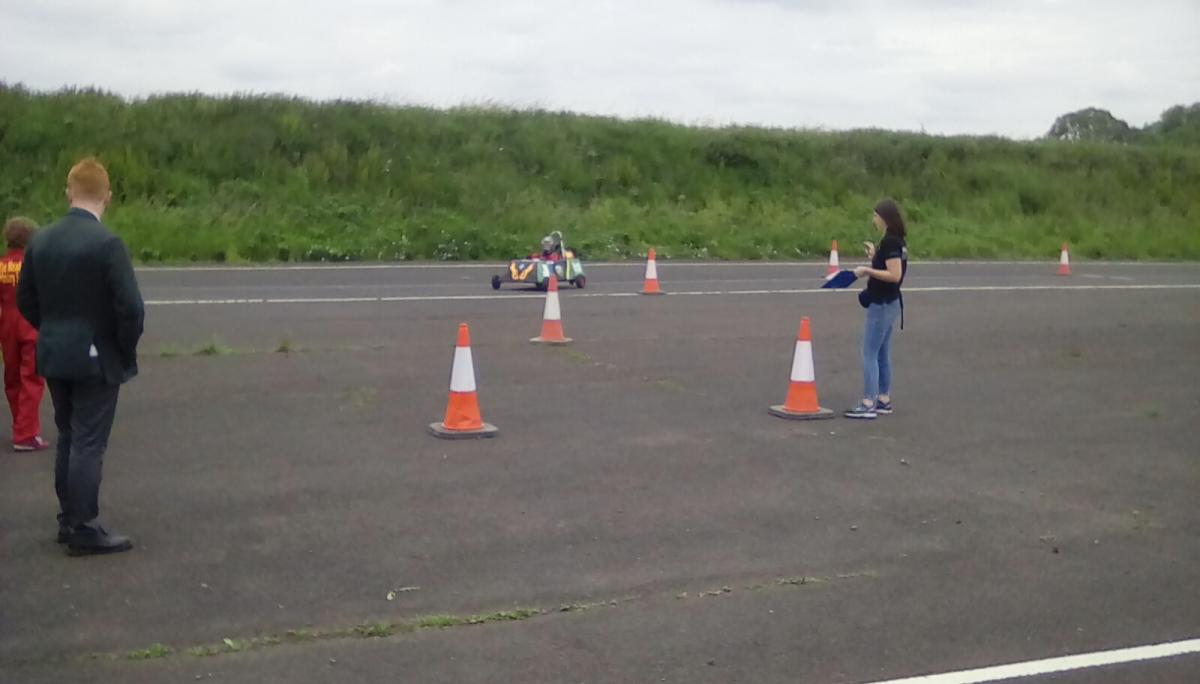 The timed lap is one of the races at the goblin car event. You have to go around the cones and try not to knock them over, and whoever gets the fastest time wins out of the other car. You also have to try not to crash.

Another rule you must follow is to go when the flag goes down. If you don’t, you get a penalty; this will cause some time added on to your score so they may not be the fastest car (if they were already).

In addition, the cars could not go into the inside of the cones or they would have to start again.  The floor of the track was very rough and there were lots of bumps (which made the cars shake when they were going around this small race track). This made the event very tricky to compete in. A racer from another team even crashed into the grass and the hill – no one was injured at all though, as they were travelling at a slow pace and were wearing safety gear to protect them.

We didn’t get the score of who got the fastest time, but we got to know who was first, second and third. The flamingo car won because even though they had an old car like us, they had a newer motor which made them go faster. Most cars had two battery boxes but the flamingo had help from Bentley which we feel gave them the competitive edge.

Overall, this race was really fun to drive on  although some people couldn’t do it because the race had to be cut short due to time constraints. 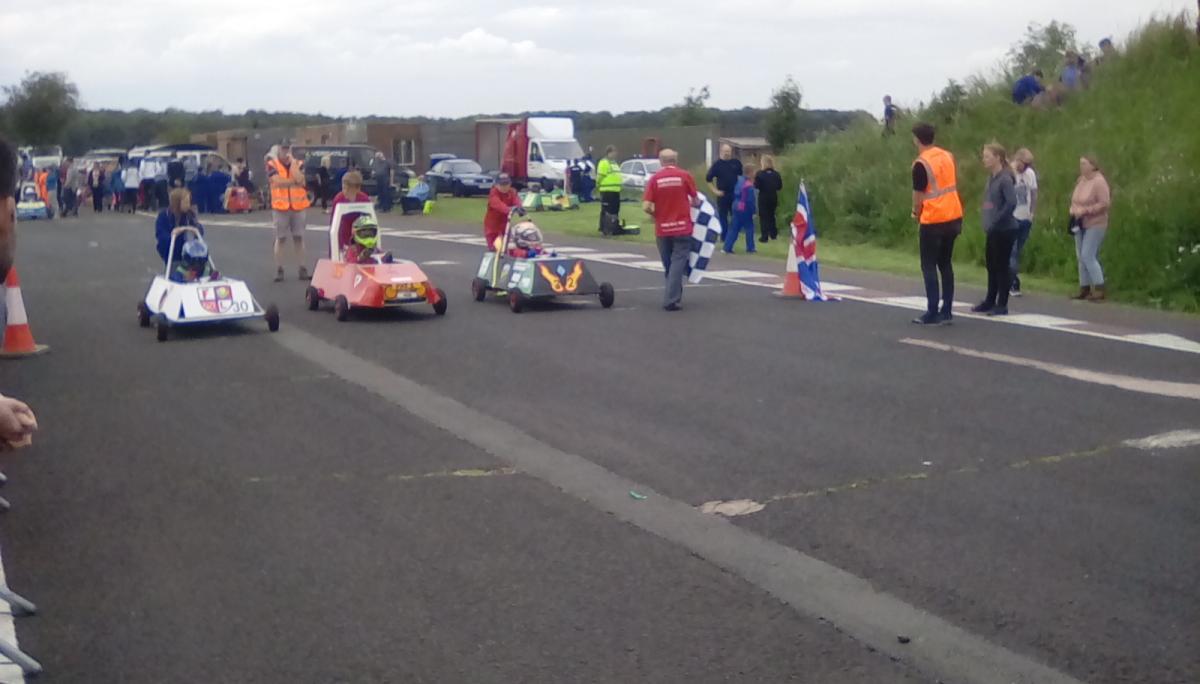 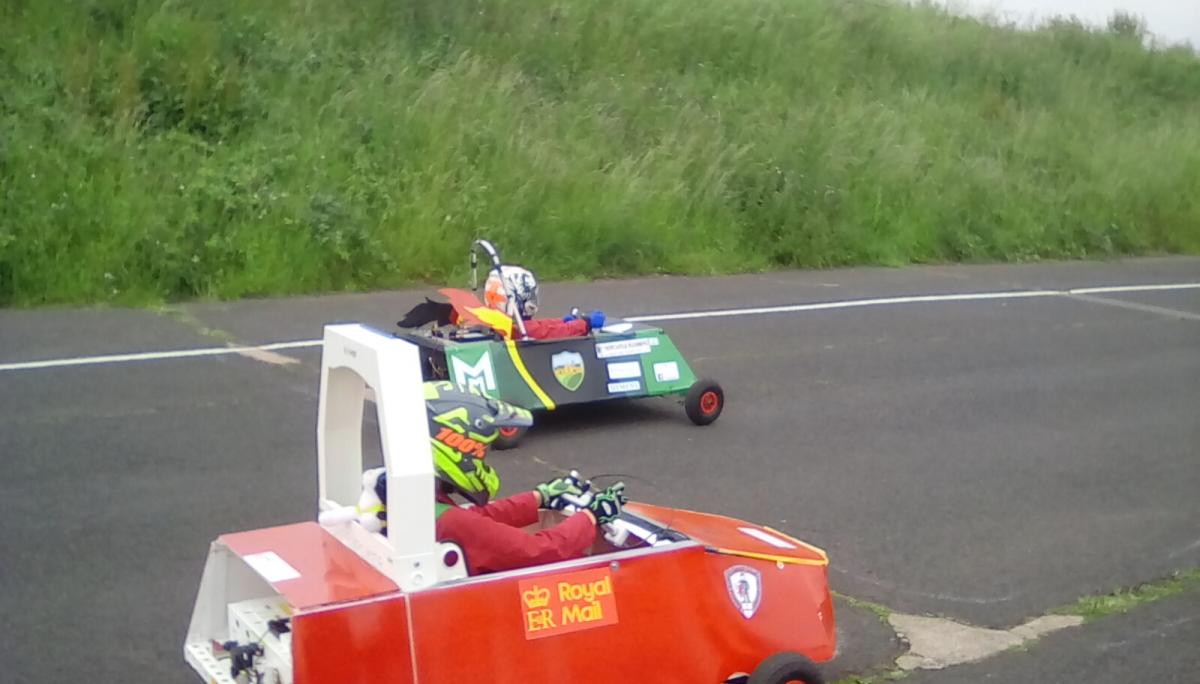 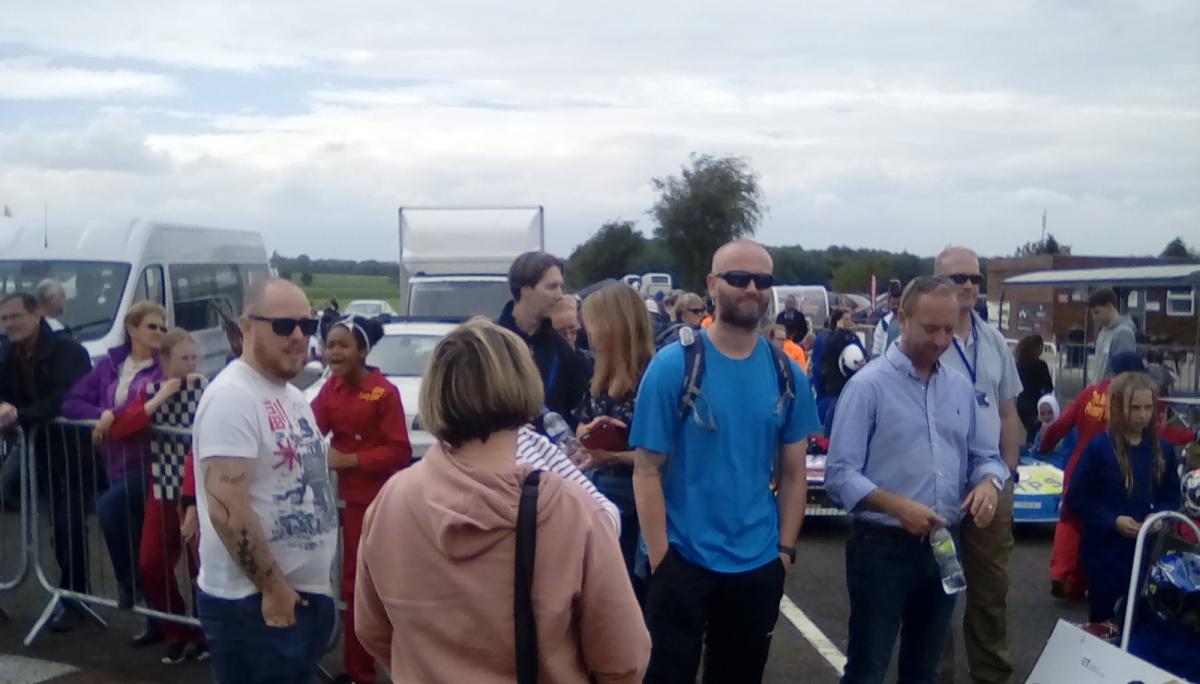 A huge thank you to all of our Meadows supporters who came to encourage us on the day. It was lovely sharing the experience with you. Thank you for cheering us on. 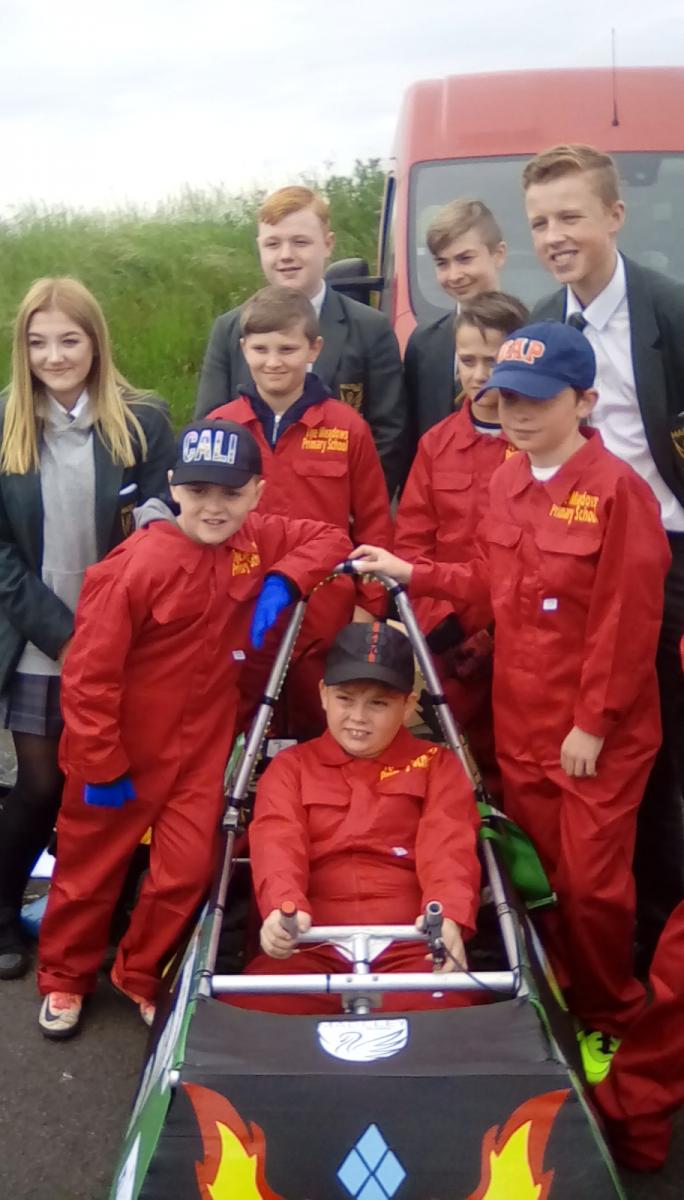 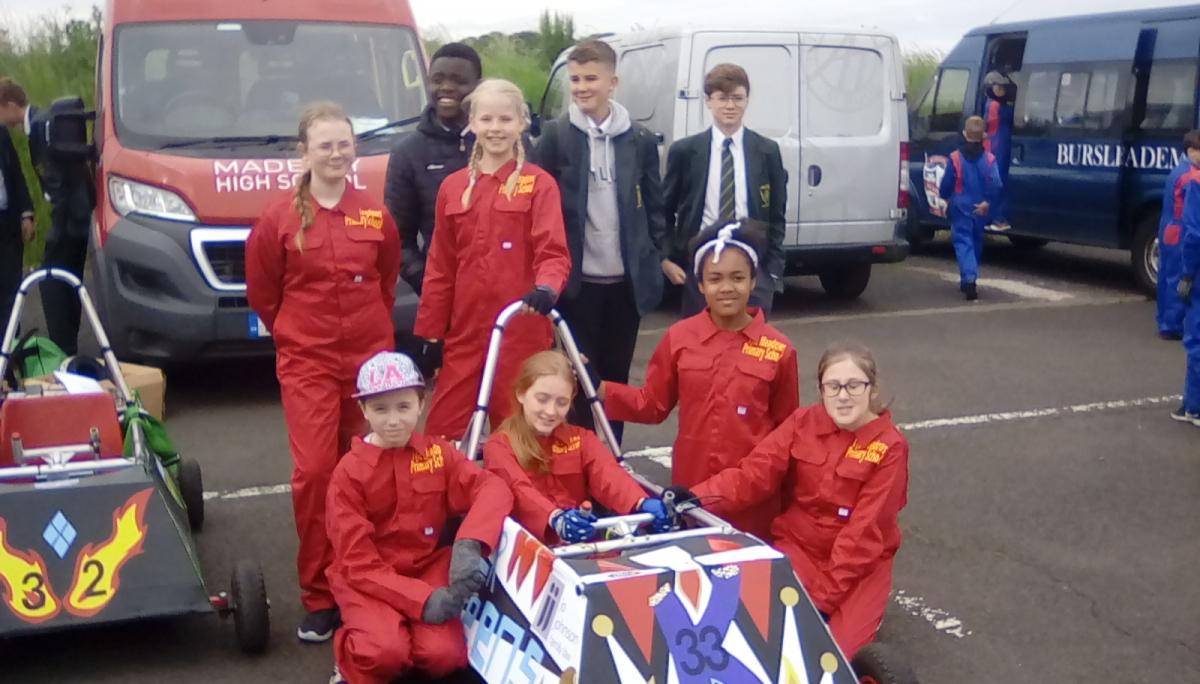 A huge thank you to our Y9 experts too who the children have really enjoyed getting to know and work with. Also to our sponsors: Newcastle Plumbing, who enabled us to buy a lot of our materials and outfits and also very kindly transported our cars to and from the event; Jo Johnson family law wo provided funds for us to buy a lot of the car's body work, and GLC personalised gifts, who made our team outfits look amazing. We couldn’t have done it without you all.